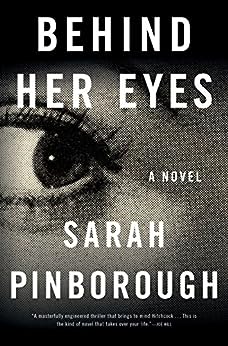 Wow!! That book was so insane. It’s actually hard to categorize what kind of story it was. If I had to shelf this in my imaginary book store, I would label it Thriller/Horror plus a teeeeny bit of Sci-Fi. Please don’t let the Sci-Fi element turn you off if you aren’t into that,  there is just a crazy twist in this that really can only be considered out of this world weird.  I really enjoy a good thriller and especially one that is able to offer some element of surprise. The characters in this book were somewhat likeable, but the one I liked best was Louise. While I didn’t always agree with her choices, she was the most relatable. One thing I would offer as a criticism would be that I would have appreciated the author withholding some details about the characters motivations. I think the author revealed too early on who they each really were. It would have been better to really have time to question if Adele, David or Louise were crazy and what their motivations were. We wouldn’t know who to root for so early on which would lead to more intrigue and “edge of your seat” curiosity. All in all, I think readers will really enjoy this. The title is already trending online with hashtags #WTFThatEnding so I predict that this book will do great things. If you are looking for a twisty kind of creepy WTF book, this is the one for you. Check it out!

AN INSTANT NEW YORK TIMES BESTSELLER
“You should read Behind Her Eyes…It’s bloody brilliant.” ―Stephen King

“An eerie thriller…Pinborough keeps us guessing about just who’s manipulating whom – until the ending reveals that we’ve been wholly complicit in this terrifying mind game.” ―The New York Times Book Review

Why is everyone talking about the ending of Sarah Pinborough’s Behind Her Eyes?

Louise is a single mom, a secretary, stuck in a modern-day rut. On a rare night out, she meets a man in a bar and sparks fly. Though he leaves after they kiss, she’s thrilled she finally connected with someone.

When Louise arrives at work on Monday, she meets her new boss, David. The man from the bar. The very married man from the bar…who says the kiss was a terrible mistake, but who still can’t keep his eyes off Louise.

And then Louise bumps into Adele, who’s new to town and in need of a friend. But she also just happens to be married to David. And if you think you know where this story is going, think again, because Behind Her Eyes is like no other book you’ve read before.

David and Adele look like the picture-perfect husband and wife. But then why is David so controlling? And why is Adele so scared of him?

As Louise is drawn into David and Adele’s orbit, she uncovers more puzzling questions than answers. The only thing that is crystal clear is that something in this marriage is very, very wrong. But Louise can’t guess how wrong―and how far a person might go to protect their marriage’s secrets.

In Behind Her Eyes, Sarah Pinborough has written a novel that takes the modern day love triangle and not only turns it on its head, but completely reinvents it in a way that will leave readers reeling.

“Deserves its own warning label…Avoid any contact with the growing buzz concerning the novel’s ingenious, to-die-for twist.” ―BookPage