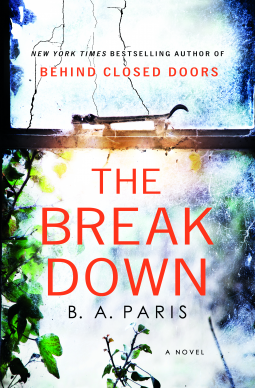 I am so super excited because I have just been approved to read an Advanced Copy of the new book coming soon from B.A. Paris. My book club friends will remember reading the last book B.A. Paris wrote called Behind Closed Doors. That book was INCREDIBLE! So you can imagine how much I am looking forward to reading this new one. It looks great too. Here is the summary…

Named One of the Most Anticipated Thriller Novels Of 2017 by Bustle!

THE NEW CHILLING, PROPULSIVE NOVEL FROM THE AUTHOR OF THE INSTANT NEW YORK TIMES AND USA TODAY BESTSELLING BEHIND CLOSED DOORS.

If you can’t trust yourself, who can you trust?

Cass is having a hard time since the night she saw the car in the woods, on the winding rural road, in the middle of a downpour, with the woman sitting inside—the woman who was killed. She’s been trying to put the crime out of her mind; what could she have done, really? It’s a dangerous road to be on in the middle of a storm. Her husband would be furious if he knew she’d broken her promise not to take that shortcut home. And she probably would only have been hurt herself if she’d stopped.

But since then, she’s been forgetting every little thing: where she left the car, if she took her pills, the alarm code, why she ordered a pram when she doesn’t have a baby.

The only thing she can’t forget is that woman, the woman she might have saved, and the terrible nagging guilt.

Or the silent calls she’s receiving, or the feeling that someone’s watching her…

You won’t be able to put down B. A. Paris’s The Breakdown, the next chilling, propulsive novel from the New York Times and USA Today bestselling author of Behind Closed Doors.

“A hair-raising debut, both unsettling and addictive…A chilling thriller that will keep you reading long into the night.” —Mary Kubica, New York Times and USA Today bestselling author of The Good Girl

“This is one readers won’t be able to put down.” —Booklist (starred review)

“This debut is guaranteed to haunt you…Warning: brace yourself.” —Bustle (10 New Thrillers to Read This Summer)

“The sense of believably and terror that engulfs Behind Closed Doors doesn’t waver.” —The Associated Press, picked up by The Washington Post

“This was one of the best and most terrifying psychological thrillers I have ever read.” —San Francisco Book Review

Everyone knows a couple like Jack and Grace. He has looks and wealth; she has charm and elegance. He’s a dedicated attorney who has never lost a case; she is a flawless homemaker, a masterful gardener and cook, and dotes on her disabled younger sister. Though they are still newlyweds, they seem to have it all. You might not want to like them, but you do. You’re hopelessly charmed by the ease and comfort of their home, by the graciousness of the dinner parties they throw. You’d like to get to know Grace better.

But it’s difficult, because you realize Jack and Grace are inseparable.

Some might call this true love. Others might wonder why Grace never answers the phone. Or why she can never meet for coffee, even though she doesn’t work. How she can cook such elaborate meals but remain so slim. Or why she never seems to take anything with her when she leaves the house, not even a pen. Or why there are such high-security metal shutters on all the downstairs windows.

Some might wonder what’s really going on once the dinner party is over, and the front door has closed.

From bestselling author B. A. Paris comes the gripping thriller and international phenomenon Behind Closed Doors.

3 thoughts on “From the writer of Behind Closed Doors B.A. Paris…”