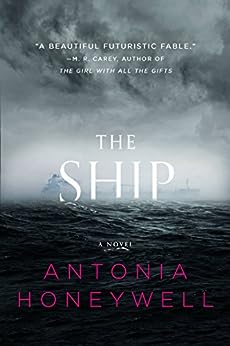 This book is out now on Kindle for $9.99 Click here to purchase: http://amzn.to/2sKvwZk

It will be out on paperback in November this year.

*Slight spoilers ahead, but nothing too detailed.*

I have mixed feelings on this book. I am such a sucker for anything post apocalyptic/dystopian so man was I excited to get my hands on this. I loved the premise. A struggling family living in London where people are basically living off of the government and their lives are controlled by the man in charge so to speak. Parts of the city are under water and much of London is either in ruins are on it’s way to being ruined. The Paul Family while struggling to make it, are much better off than most because of Michael Paul. He is an inventor/scientist who has helped the government develop some of the technology that helps to control its citizens. Michael’s daughter Lallage (Lalla) and her mother have a soft spot for all of the less fortunate people and families they see in their city and so they try to help as much as they can. Michael on the other hand has been working on a way to get his family away from there and create a new society that they can thrive in. When the time comes to finally leave London on a giant ship with 500 other people, Lalla’s mother is killed on their journey to the ship. Lalla and her father continue onto the ship and Michael quickly expects Lalla to move on with her grieving and leave the heartbreaking loss of her mother behind her. As the days and weeks go by on the ship, Lalla begins to question why they aren’t reaching a destination. Her questions about where they are headed are answered with vague replies and it is driving her almost literally crazy. Meanwhile, Lalla begins to fall in love with Tom. A boy her age who is without any family on the ship. While this new found love seems to help her move forward and begin to adjust, she still constantly questions everything. Where are they headed? Why does the sun set on the same side of boat as it rose? Why do they have so many supplies on board for a journey that couldn’t possibly take long enough to get through them all? Etc. Lalla’s constant struggle with these questions was something I had a hard time dealing with. Her perspective and thoughts are so all over the place and constantly flip flopping I had a hard time understanding how she really felt. In one sentence she was ready to be with Tom and start a life there with him and in the next sentence she felt she must find a way back to London or to any land for that matter. There is a passage in the book that helped me understand a bit where she was coming from though. She basically can’t understand how good she has it on the ship simply because she really didn’t understand how bad things were back at home. She wasn’t one of the people not knowing where their next meal would come from or whether there children would be murdered in front of them for some minor infraction. Lalla has a desperation for land and to grow plants and make a new life for her and Tom but doesn’t seem to realize that the people on the ship view the ship as their new life. The life aboard the ship is worlds better than they had it and they truly believe that they are in a better place. They want for nothing, have all the food and water they could ever need and can see their children growing up in normal happy world that they never thought was possible back in London. Elsewhere in the world economies have crashed, whole countries are burning and the world has fallen apart. The fact that Lalla can’t seem to see that and has this idealistic view that she must return to land drove me nuts. She makes decisions late in the book that had me yelling at my Kindle saying “What are you doing dummy?!” But I guess she had to stay true to herself no matter how selfish she seemed and how many lives she may have ruined or will ruin in the future. One other thing I had a really hard time with was suspending my belief about how stocked the ship was. They had everything from massive amounts of food to clothing for each person for years to come. How in a world so torn apart and reliant on the government to provide was Michael able to gather all of those supplies without government interference or theft? You would think that broke, starving people in London may have gotten word that there was a ship in the local port stocked with 30 years worth of food and supplies. And in that case would have found a way to steal the supplies or stow away on board. With some slight changes, I would have given this book 5 stars. It was a unique story and had all of the details that I love when it comes to survival and escape from a terrible world. I read it quickly and would recommend to others with the advice to take it for what it is.

London is burning and Lalla has one hope for survival, a ship–a new Noah’s Ark–that can only save 500 people, in this “Powerful, haunting, and beautiful” (M. R. Carey) debut novel.

London burned for three weeks. And then it got worse…

Young, naive Lalla has grown up in near-isolation in her parents’ apartment, sheltered from the chaos of their collapsed civilization. But things are getting more dangerous outside. People are killing each other for husks of bread, and the police are detaining anyone without an identification card. On her sixteenth birthday, Lalla’s father decides it’s time to use their escape route–a ship he’s built that is only big enough to save five hundred people.

But the utopia her father has created isn’t everything it appears. There’s more food than anyone can eat, but nothing grows; more clothes than anyone can wear, but no way to mend them; and no-one can tell her where they are going.