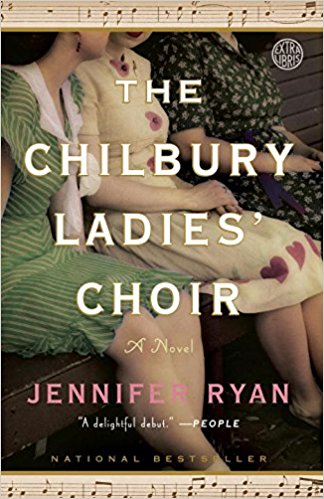 As someone who LOVED The Nightingale and has since been looking for a book that even comes close to how good it was, I think I finally found one! The Chilbury Ladies’ Choir by Jennifer Ryan was amazing! As I have mentioned in past reviews, I love WWII novels. Not because of the tragedy or sadness, but because those times were so interesting. Everyone from the soldiers to their families, they all played a role in the efforts to conquer the Nazis. Although the story is set in the 1940’s it doesn’t feel at all dated. It is a different take on the war than I have read in the past. The story is told through a series of letters and journal entries by the women in the English town of Chilbury. When the story begins, all of the able bodied men in the town have been sent to war which means the Chilbury Choir cannot go on. The opinion by the town Vicar is that the choir must have men to be successful and proper. The ladies are devastated when they find out that the choir will be discontinued because for them it has been an outlet and a source of joy in these hard times. When a new music tutor named Prim moves to Chilbury, she convinces the Vicar to allow the choir to continue and rightly renames it the Chilbury Ladies Choir, hence the name of the book. The women begin practicing for a choir competition which livens their spirits and brings them joy even as all around them young soldiers are being killed and families are being broken apart. What I love about this book are all of the interwoven stories and characters. There is young thirteen year old itty who longs to be a singer and whose older sister Venetia is as Kitty says “Beastly”. Venetia flirts with all of the boys in town and flaunts her beauty around as if it was currency. She is pretty beastly to her little sister Kitty as well as their Czech (Jewish) evacuee Silvie who’s parents we able to get her out of the country before the Nazis invaded. Silvie’s parents stayed behind and their fate is yet unknown. Mrs. Tilling and Miss Edwina Paltry are the towns nurse and midwife who become entangled in a paternity scheme in which The Brigadier (Kitty and Venetia’s horrible father) pays one of them to switch his wife’s baby with Venetia’s friend Hattie’s baby in the event that his baby is not a boy. The Brigadiers inheritance depends on him having a son after the death of his older son Edmund in the war. All of their stories tie in to one another which such ease and interest that I found myself very invested in them all. I liked each and every character even the ones who were portrayed as villain’s because they all had redeeming qualities. Even cranky old Mrs. B! Something else I enjoyed about the book was that they were very realistic about the war. They killed off some characters that I thought would for sure be there until the end. I always feel more invested in a book when I know characters lives are actually at stake. Jennifer Ryan’s writing is very beautiful. I found myself writing down quotes many times. Here are a few examples:

“But if we don’t think of our death until we die, how can we decide how we want to live?”

Another quote I like when a solider from Dunkirk has died:
“Another life just begun and already over. A faraway star glows brighter and then disappears into the void. What an insignificant, unprepared army of souls we are.”

“We have prayer enough to light up the whole universe, like a thousand stars breathing life into our deepest fears.”

Pick this one up if you love WWII books, if you love stories told and written by women, and if you enjoy a wonderfully written, fully realized book,

Thank you to Blogging For Books for the copy of this book. It was easy to give an honest review since I loved it so much.

For readers of Lilac Girls and The Nightingale, The Chilbury Ladies’ Choir unfolds the struggles, affairs, deceptions, and triumphs of a village choir during World War II.

As England becomes enmeshed in the early days of World War II and the men are away fighting, the women of Chilbury village forge an uncommon bond. They defy the Vicar’s stuffy edict to close the choir and instead “carry on singing,” resurrecting themselves as the Chilbury Ladies’ Choir. We come to know the home-front struggles of five unforgettable choir members: a timid widow devastated when her only son goes to fight; the older daughter of a local scion drawn to a mysterious artist; her younger sister pining over an impossible crush; a Jewish refugee from Czechoslovakia hiding a family secret; and a conniving midwife plotting to outrun her seedy past.

An enchanting ensemble story that shuttles from village intrigue to romance to the heartbreaking matters of life and death, Jennifer Ryan’s debut novel thrillingly illuminates the true strength of the women on the home front in a village of indomitable spirit.