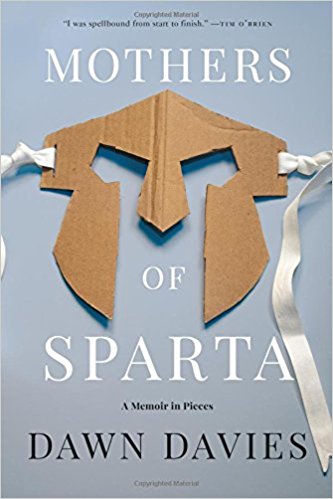 “Once you know you will never see someone again, nostalgia for what could have been makes you love them more.”

Mothers of Sparta has to be one of the most quotable books I have ever read. I feel like I could pick any page at random, point my finger to a line and bam! There would be a beautiful piece of writing under my finger tip.

I have been thinking about this book and how to write my review since I finished it back in early January. To date, it is THE hardest review I have had to write. Reading and reviewing books can be challenging especially when the book is a memoir written about someone’s life. The writer is opening their heart, baring their soul for the public and taking the reader along on the most personal journey possible. While I was about halfway through Mothers of Sparta, I reached out to Dawn to let her know how much I was enjoying her stories. I laughed out loud reading the list of men she would have slept with in Chapter 8 and playfully argued with her over Twitter about who would get to bang Trent Reznor. Ha! Obvious picks like John Cena and Jon Hamm were on the list but she also included brainiacs like Dr. Ben Carson and strangers like the “Customer in Wheelchair” – Legal Sea Foods in Boston, Massachusetts.  I have read this whole chapter aloud to anyone who would listen to me and re-read it at least twice. I honestly can say this as one of the funniest things I have ever read.

Dawn’s way of writing took me on a journey through the ups and downs of her life and I thoroughly enjoyed it. At one point when she has been dealing with health issues and easing off the pain medications she feels increasingly and scarily in need of she says, “When faced with a new thing, we always get a choice. We can turn back to what we know is safe or we can take a chance and do the thing, even if it scares us.” She talks about pain medication and other types of drugs and how they numb us and make us feel protected, but also how they can rapidly become a problem. “We take drugs to avoid pain, we avoid pain because we are afraid of losing control, and we lose control trying not to feel pain. The pain eats the drugs, the drugs eat the anxiety, the anxiety eats the pain…” I just fell into her words and found myself nodding my head with understanding because although I haven’t personally dealt with this type of addiction, you can really begin to understand how it happens to people.

Another passage I loved is when Dawn has to put their family dog Moose to sleep. She says she will have to tell her children what happened and knows it will break their hearts. “Children can hold hope for a long time without it burning their hands, far longer than adults can, which is what allows them to complete the act of growing up in a world where people lie, where people let you down all the time, a world where love isn’t always enough, a world where, sometimes, you have to give up on someone else in order to save yourself. Yet, losing this kind of hope can break a child’s heart. That is why parents lie to their kids. Because they aren’t ready to see them lose hope.” I mean come on! Are these not some of the most beautiful words you’ve ever read?? I fell in love over and over again with Dawns writing. Ooooooh wee! Re-reading Dawns many, many passages about childhood and raising little people brought me to tears all over again while writing this blog post. She calls the time when your kids are little “The season when your children are as beautiful as they have ever been, though you thought nothing could be as beautiful as their babyhood. The flushed, salty cheeks, the hair sticking to the sweat on their necks, their knobby knees…” Ugh….feeling all the feels as a Mama of two little boys. One who is an adorable, feisty 5 year old and one a pudgy, sweet and happy 5 month old.

With all of that being said, the book took a deep dive into the darkest corner of heartbreak territory on page 217. First let me say it must be extremely hard for a writer to arrange the chapters in their book knowing that the order they are published in could make or break how a reader feels about it as a whole. Once I began reading the title chapter of the book Mothers of Sparta, I quickly began to realize why this particular essay was placed towards the end. If it had been placed in the beginning, I can honestly say I may not have read any further. I would have been too afraid the rest of the stories would be as hard to read. Mothers of Sparta takes us on a heartbreaking journey into the darkest places being a parent can take us. Dawn’s 16 year old son has autism which in and of itself has it parenting challenges. With the addition of other very intense and often unlawful behaviors and his diagnosed sociopath personality disorder, Dawn is left questioning how to parent him with the love and compassion a mother needs to have all while protecting others from him.  My biggest concern with this chapter is that the details written are too much for most people to handle, myself included. I understand why Dawn had to write it, but I really think her readers could have been spared some very gruesome descriptions about animal abuse and child endangering behaviors her son is involved in. Keeping things like that vague allows your reader to understand and be compassionate without making us feel icky inside. I found myself unable to sleep after reading this chapter before bed.

Trigger Warnings: Animal abuse, animal death and child sex abuse/pornography (after page 217). If these are triggers or you just don’t feel like subjecting yourself to these issues, stop the book before this chapter begins and end your reading with chapter 14, The King of World.

To be completely honest, I have a really hard time saying that because although I didn’t enjoy reading the last two chapters of the book, the writing was still so wonderful throughout. I feel so much for Dawn because as a mother myself, I can’t imagine trying to help your child through this and loving them unconditionally all the while having to protect the outside world from your own son. It is such an unimaginable place to be in as a parent. You never expect that the beautiful little baby you bring home from the hospital could harm another creature simply because “He felt like it.” I give Dawn an IMMENSE amount of credit. She has tried everything from science to religion and has been to every doctor and psychiatrist along her journey to heal her boy. The best she can hope for according to one doctor is that his brain could continue developing the part in charge of self-control into his twenties which would allow him to function according to the laws of society. So as Dawn says, she “would only have to figure out how to keep him and other’s safe until then.”

It is interesting to me as I reflect back on my reading list seeing some of the titles I have had no problems reading in comparison to this book. Non-fiction tales from the coroner’s office and countless creepy Stephen King books have had their icky moments, but this one left me with a visceral reaction. Maybe it hits too close to home as a fellow parent? Regardless, I hope this review doesn’t turn you off from reading this. Dawn Davies is a wonderful woman, mother and writer. She deserves every ounce of critical acclaim and praise her book is generating. I will cheer for her on book release day and hope to hear loads of wonderful reviews for The Mothers of Sparta.

Thank you to Flat Iron Books and Dawn Davies for the Advanced Reader Copy of this book in exchange for an honest review.

An Indie Next List Pick for February
Literary Hub: 15 Books You Should Read This January

If you’re looking for a parenting book, this is not it. This is not a treatise on how to be a mother.

This is a book about a young girl who moves to a new town every couple of years; a misfit teenager who finds solace in a local music scene; an adrift twenty-something who drops out of college to pursue her dream of making cheesecake on a stick a successful business franchise (ah, the ideals of youth). Alone in a new city, she summons her inner strength as she holds the hand of a dying stranger. Davies is a woman who finds humor in difficult pregnancies and post-partum depression (after reading “Pie” you might never eat Thanksgiving dessert the same way). She is a divorcee who unexpectedly finds second love. She is a happily married suburban wife who nevertheless makes a mental list of all the men she would have slept with. And she is a parent who finds herself tested in ways she could never imagine. In stories that cut to the quick, Davies explores passion, loss, illness, pain, and joy, told from her singular, gimlet-eyed, hilarious perspective.

Mothers of Sparta is not a blow-by-blow of Davies’ life but rather an examination of the exquisite and often painful moments of a life, the moments we look back on and say, That one, that one mattered. Straddling the fence between humor and, well…not humor, Davies has written a book about what it’s like to try to carve a place for oneself in the world, no matter how unyielding the rock can be.