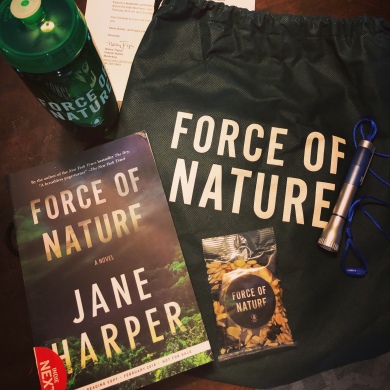 “Later, the four remaining women could fully agree on only two things. One, no one saw the bush land swallow up Alice Russell. And two, Alice had a mean streak so sharp it could cut you.”

Happy New Release Tuesday! Force of Nature is out today by Jane Harper.

Did you hear a loud squeal about a month ago? If so, that was me opening a package from Flat Iron Books that had Jane Harper’s new book Force of Nature and a whole bunch of hiking themed goodies. There was a water bottle, flashlight, snacks and a travel bag. What a great marketing idea! So a big thank you to Flat Iron Books and also to Jane Harper for this goodie bag in exchange for an honest review.

Force of Nature is Jane Harper’s follow up novel to her wonderfully received and best selling book The Dry which came out in January 2017. The Dry was on just about everyone’s best of the year list and was one of Reese Witherspoon’s book club picks this year. Click here to read my review of The Dry on Good Reads.  It was a quick read with lots of great characters and a wonderful twisty mystery at its heart. What’s neat is that Jane is creating a book series based on the cases of Aaron Falk. He is a solid character that I find myself gravitating towards. After reading this new book Forces Of nature, I can say with certainty that the Aaron Falk Series can be read by anyone and you don’t have to have read The Dry in order to read Force of Nature. Aaron has some history that is explained in The Dry, but it has no bearing on this next book other than a small side plot about the relationship between him and his late father. In all honesty I had some concerns about Force of Nature, but only because it seemed too quick to be releasing a new book in the Aaron Falk Series. Maybe Jane wrote a bunch of these books in a row and will be releasing them each year? Either way, I can 100% say that this book is well written and doesn’t seem rushed a bit. Jane is smart releasing it so quickly after having such a success with The Dry.

Force of Nature was very good, but not quite as good as The Dry. I thoroughly enjoyed it though. It was a welcomed departure from the last book I read Oliver Loving, which I loved but phew am I glad it over. It was easy to read and the story flowed. I got through it very fast and could have very well read it in one sitting if I didn’t have two little guys running around.

Jane connects her stories The Dry and Force of Nature very easily. Alice Russell, the woman who goes missing while hiking during a company retreat was getting information for Aaron Falks investigation on her boss and CEO of her company. They are laundering money and Alice’s data will be the final piece of information the authorities need to arrest Jill and Daniel Bailey. Aaron received a message from Alice’s cell phone late in the night and the only words he can make out are “hurt her”. Aaron immediately comes to the conclusion that his investigation may very well have led to the disappearance and potential death of Alice if she isn’t found alive. There is a ton of great back story on the women Alice was on the retreat with and many interesting connections. Jane misleads us throughout the book which keeps the reader on their toes.

If you read and enjoyed The Dry, definitely read this next.

Five women go on a hike. Only four return. Jane Harper, the New York Times bestselling author of The Dry, asks: How well do you really know the people you work with?

When five colleagues are forced to go on a corporate retreat in the wilderness, they reluctantly pick up their backpacks and start walking down the muddy path.

But one of the women doesn’t come out of the woods. And each of her companions tells a slightly different story about what happened.

Federal Police Agent Aaron Falk has a keen interest in the whereabouts of the missing hiker. In an investigation that takes him deep into isolated forest, Falk discovers secrets lurking in the mountains, and a tangled web of personal and professional friendship, suspicion, and betrayal among the hikers. But did that lead to murder?