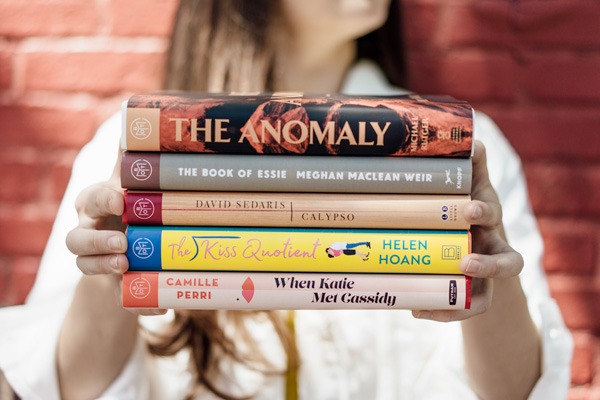 The BOTM code for your special intro offer is changing this month! New members will get a free book with code USESPF!

Get a free book when you use code USESPF. Join today!

Members will pay $14.99 when you sign up for a subscription that will renew monthly. You’ll also receive a credit for a free book at the time of this transaction (redeemable at any time). Yay!! Then you’ll automatically be renewed at the end of your second month (unless you decide to cancel).

Now on to the juicy stuff:

This month, the selections are easy, breezy vacation reads. Fast-paced adventure, hilarious essays by David Sedaris, a family scandal on reality TV, and more. Like the perfect June cocktail, BOTM’s Summer-Perfect Fiction is light, fun, and won’t weigh you down. 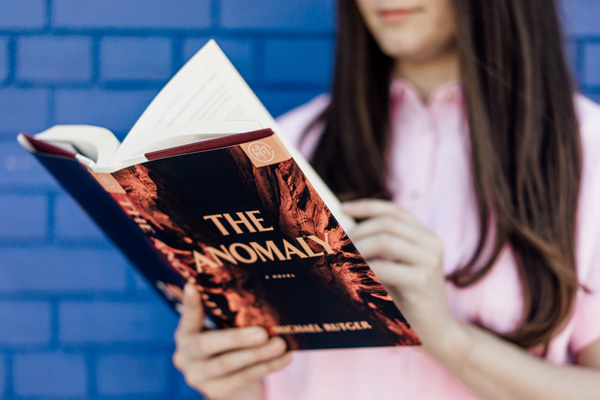 An utterly gripping thriller perfect for fans of Dan Brown, Michael Crichton and Stephen King. The Anomaly will leave you breathless until the final page has been turned . . . They sought the truth. They found a nightmare. A TV crew arrive at the Grand Canyon led by Nolan Moore, amateur archaeologist and host of The Anomaly Files. Following the trail of a decades-old conspiracy, the team seek proof of a cave within the canyon, hidden from public record and filled with ancient treasures. At first, it seems that, once again, the crew will return to LA empty-handed. But then their luck turns. They find a cave and artefacts beyond their wildest imagination. But the team’s elation is short-lived as they become trapped within the cavern’s dark passages with little possibility of escape. Then events take an even more terrifying turn. For not all secrets are meant to be found . . . ‘Gripping, exciting, page-turning fun. I suspect Michael Crichton would have been happy to put his name to it’ John Connolly ‘Crackles with claustrophobic tension that had me holding my breath. Sharp dialogue, a dizzying central plot, and a real sense of dread throughout, I couldn’t sleep until I’d finished reading, and then I couldn’t sleep just thinking about it. I loved it’ Sarah Pinborough, bestselling author of BEHIND HER EYES ‘Brilliant. Thrilling, tense, dark, funny. Michael Crichton meets Indiana Jones’ C. J. Tudor, author of THE CHALK MAN ‘Smart, scary and beautifully written – a thriller filled equally with shivers and real heart. I absolutely loved it’ Steve Mosby ‘This is my kind of book. The suspense mounts slowly… slowly… Then the horror lingers for a long, long time’ R. L. Stine ‘Strap in for a break-neck, claustrophobic ride – The Anomaly is dark and deadly’ James Swallow ‘If you enjoy being scared witless, this is the book for you. A deftly written thriller that will give you second thoughts about turning out the lights’ David Jackson ‘A taut, take-no-prisoners thriller, lean and fast as an express train. Make no mistake: The Anomaly is the real deal’ Lincoln Child, Number 1 New York Times Bestseller ‘I LOVED The Anomaly. The most exciting, unputdownable book I’ve read in a long time’ Mark Edwards ‘Brilliant. A thrilling, horrifying, gripping page turner that you want to race through but at the same time don’t want to end because you’re enjoying it so much. Like Michael Crichton had written The Descent’ Martyn Waites 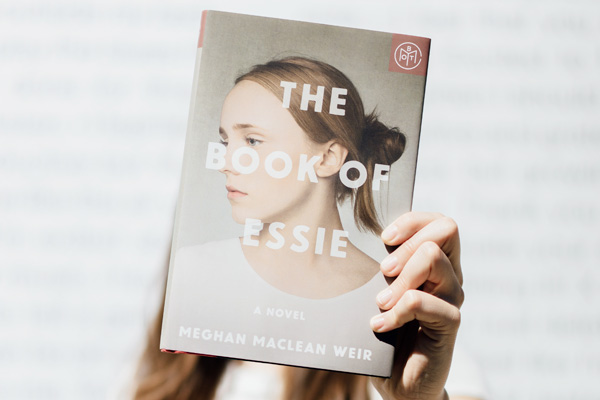 This was my Moms pick this month!

A debut novel of family, fame, and religion that tells the emotionally stirring, wildly captivating story of the seventeen-year-old daughter of an evangelical preacher, star of the family’s hit reality show, and the secret pregnancy that threatens to blow their entire world apart.

Esther Ann Hicks–Essie–is the youngest child on Six for Hicks, a reality television phenomenon. She’s grown up in the spotlight, both idolized and despised for her family’s fire-and-brimstone brand of faith. When Essie’s mother, Celia, discovers that Essie is pregnant, she arranges an emergency meeting with the show’s producers: Do they sneak Essie out of the country for an abortion? Do they pass the child off as Celia’s? Or do they try to arrange a marriage–and a ratings-blockbuster wedding? Meanwhile, Essie is quietly pairing herself up with Roarke Richards, a senior at her school with a secret of his own to protect. As the newly formed couple attempt to sell their fabricated love story to the media–through exclusive interviews with an infamously conservative reporter named Liberty Bell–Essie finds she has questions of her own: What was the real reason for her older sister leaving home? Who can she trust with the truth about her family? And how much is she willing to sacrifice to win her own freedom? 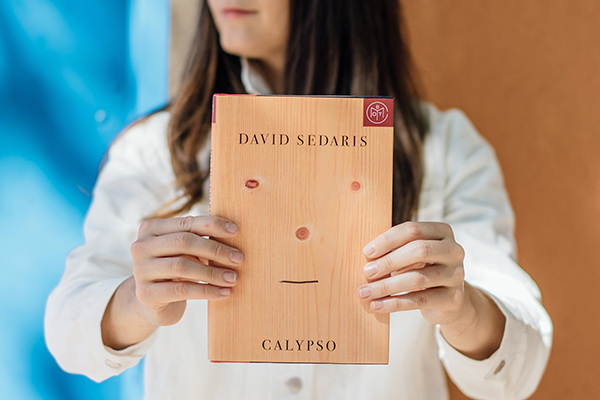 If you’ve ever laughed your way through David Sedaris’s cheerfully misanthropic stories, you might think you know what you’re getting with Calypso. You’d be wrong. When he buys a beach house on the Carolina coast, Sedaris envisions long, relaxing vacations spent playing board games and lounging in the sun with those he loves most. And life at the Sea Section, as he names the vacation home, is exactly as idyllic as he imagined, except for one tiny, vexing realization: it’s impossible to take a vacation from yourself. With Calypso, Sedaris sets his formidable powers of observation toward middle age and mortality. Make no mistake: these stories are very, very funny–it’s a book that can make you laugh ’til you snort, the way only family can. Sedaris’s powers of observation have never been sharper, and his ability to shock readers into laughter unparalleled. But much of the comedy here is born out of that vertiginous moment when your own body betrays you and you realize that the story of your life is made up of more past than future. This is beach reading for people who detest beaches, required reading for those who loathe small talk and love a good tumor joke. Calypso is simultaneously Sedaris’s darkest and warmest book yet–and it just might be his very best. 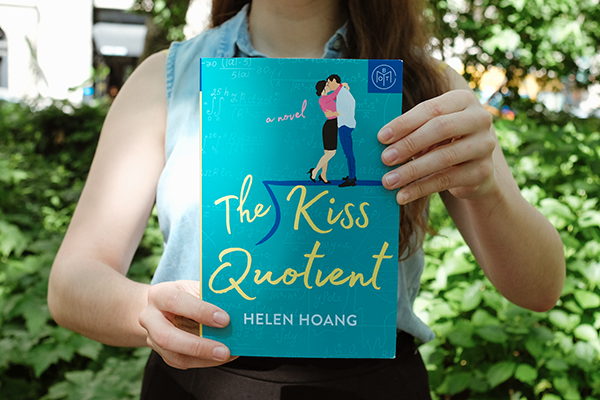 “This is such a fun read and it’s also quite original and sexy and sensitive.”–Roxane Gay, New York Times bestselling author

“Hoang’s writing bursts from the page.”–Buzzfeed

A heartwarming and refreshing debut novel that proves one thing: there’s not enough data in the world to predict what will make your heart tick.

Stella Lane thinks math is the only thing that unites the universe. She comes up with algorithms to predict customer purchases–a job that has given her more money than she knows what to do with, and way less experience in the dating department than the average thirty-year-old.

It doesn’t help that Stella has Asperger’s and French kissing reminds her of a shark getting its teeth cleaned by pilot fish. Her conclusion: she needs lots of practice–with a professional. Which is why she hires escort Michael Phan. The Vietnamese and Swedish stunner can’t afford to turn down Stella’s offer, and agrees to help her check off all the boxes on her lesson plan–from foreplay to more-than-missionary position…

Before long, Stella not only learns to appreciate his kisses, but crave all of the other things he’s making her feel. Their no-nonsense partnership starts making a strange kind of sense. And the pattern that emerges will convince Stella that love is the best kind of logic… 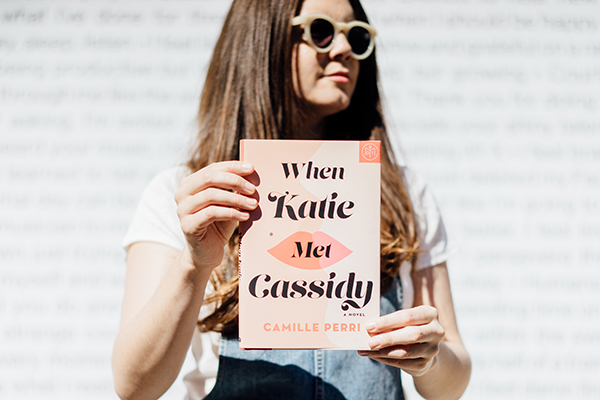 From the acclaimed author of The Assistants comes another gutsy book about the importance of women taking the reins–this time, when it comes to love, sex, and self-acceptance.

“Perri’s book is a real gift–tender, sexy as hell and laugh out loud funny.”–Cynthia D’Aprix Sweeney

When it comes to Cassidy, Katie can’t think straight.

Katie Daniels, a twenty-eight-year-old Kentucky transplant with a strong set of traditional values, has just been dumped by her fiancé when she finds herself seated across a negotiating table from native New Yorker Cassidy Price, a sexy, self-assured woman wearing a man’s suit. At first neither of them knows what to make of the other, but soon their undeniable connection will bring into question everything each of them thought they knew about sex and love.

When Katie Met Cassidy is a romantic comedy about gender and sexuality, and the importance of figuring out who we are in order to go after what we truly want. It’s also a portrait of a high-drama subculture where barrooms may as well be bedrooms, and loyal friends fill in the spaces absent families leave behind. Katie’s glimpse into this wild yet fiercely tightknit community begins to alter not only how she sees the larger world, but also where exactly she fits in. 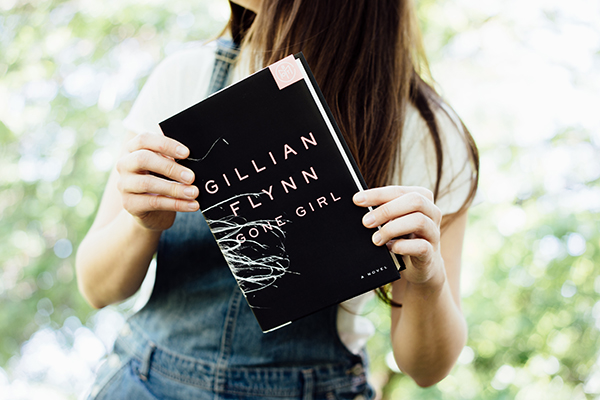 Also this month…BOTM is offering Gillian Flynn’s Gone Girl. Add this book to your box for just $9.99!

Marriage can be a real killer. One of the most critically acclaimed suspense writers of our time, New York Times bestseller Gillian Flynn takes that statement to its darkest place in this unputdownable masterpiece about a marriage gone terribly, terribly wrong. The Chicago Tribune proclaimed that her work “draws you in and keeps you reading with the force of a pure but nasty addiction.” Gone Girl’s toxic mix of sharp-edged wit and deliciously chilling prose creates a nerve-fraying thriller that confounds you at every turn.

On a warm summer morning in North Carthage, Missouri, it is Nick and Amy Dunne’s fifth wedding anniversary. Presents are being wrapped and reservations are being made when Nick’s clever and beautiful wife disappears from their rented McMansion on the Mississippi River. Husband-of-the-Year Nick isn’t doing himself any favors with cringe-worthy daydreams about the slope and shape of his wife’s head, but passages from Amy’s diary reveal the alpha-girl perfectionist could have put anyone dangerously on edge. Under mounting pressure from the police and the media—as well as Amy’s fiercely doting parents—the town golden boy parades an endless series of lies, deceits, and inappropriate behavior. Nick is oddly evasive, and he’s definitely bitter—but is he really a killer?

As the cops close in, every couple in town is soon wondering how well they know the one that they love. With his twin sister, Margo, at his side, Nick stands by his innocence. Trouble is, if Nick didn’t do it, where is that beautiful wife? And what was in that silvery gift box hidden in the back of her bedroom closet?   With her razor-sharp writing and trademark psychological insight, Gillian Flynn delivers a fast-paced, devilishly dark, and ingeniously plotted thriller that confirms her status as one of the hottest writers around.

That’s all for now! We’re so excited for SPF (a Summer of Perfect Fiction!). 😉 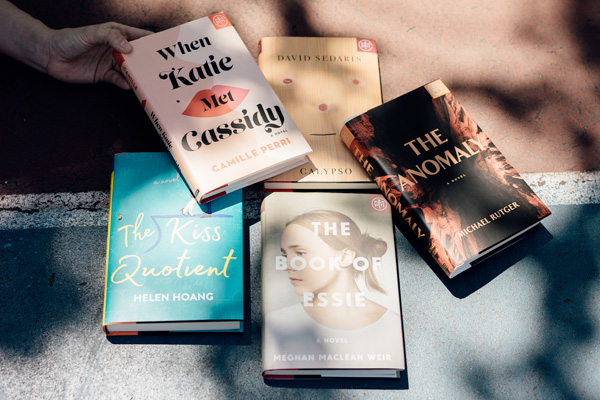 Get a free book when you use code USESPF. Join today!

One thought on “Book of The Month Selections for June 2018”