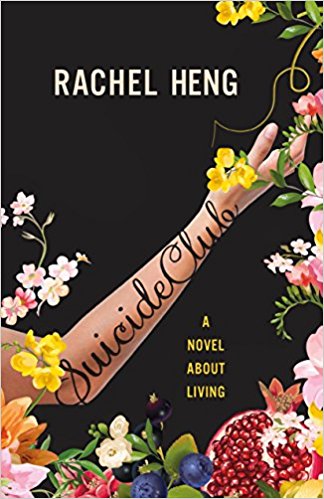 In Rachel Heng’s debut set in near future New York City―where lives last three hundred years and the pursuit of immortality is all-consuming―Lea must choose between her estranged father and her chance to live forever.

Lea Kirino is a “Lifer,” which means that a roll of the genetic dice has given her the potential to live forever―if she does everything right. And Lea is an overachiever. She’s a successful trader on the New York exchange―where instead of stocks, human organs are now bought and sold―she has a beautiful apartment, and a fiancé who rivals her in genetic perfection. And with the right balance of HealthTech™, rigorous juicing, and low-impact exercise, she might never die.

But Lea’s perfect life is turned upside down when she spots her estranged father on a crowded sidewalk. His return marks the beginning of her downfall as she is drawn into his mysterious world of the Suicide Club, a network of powerful individuals and rebels who reject society’s pursuit of immortality, and instead choose to live―and die―on their own terms. In this future world, death is not only taboo; it’s also highly illegal. Soon Lea is forced to choose between a sanitized immortal existence and a short, bittersweet time with a man she has never really known, but who is the only family she has left in the world.

This one felt incomplete. I think the author had an incredible idea for a story, but I didn’t think the characters were well written. Lea and Anja were our two lead characters and both were unlikeable. Lea has a mean streak within her that we hear about on multiple occasions, but it doesn’t seem to affect her everyday life with work and friendships. It later affects the relationship with her long time boyfriend, but this one dimensional character didn’t convey a “she has been violent with me in the past” vibe to us as the reader. If that makes sense? Her father comes back into her life after a long time away, but she only seems mildly phased. Maybe it’s because we find out later the real reason behind his absence had more to do with Lea than originally it appeared. Anja is the head of the Suicide Club yet makes strange decisions to not secure the club against people trying to out her organization to the authorities. She doesn’t seem ruthless or cutthroat enough to be the head of such an anti-establishment group. I just wasn’t wowed by the book like I hoped I would be. The premise of people living for hundreds of years with the government monitoring their every move in order to protect their “investments” in their citizens bodies sounded amazing! But I just felt “meh” about the whole thing. I always hate writing a review where I’m not 100% praising it, or even 50% praising a book. I’m not a writer myself so who am I to say what is a great novel, and what isn’t? All I can tell you as a book reviewer is what I enjoyed, and what I didn’t. Like I always say, you may love this! I just have to remain honest and say unfortunately I did not.

I will end on a positive note however. The cover of this novel is GORGEOUS! I love the black cover with the contrasting bright beautiful flowers.

Thank you to NetGalley and the publisher for this Advanced Readers Edition of Suicide Club.